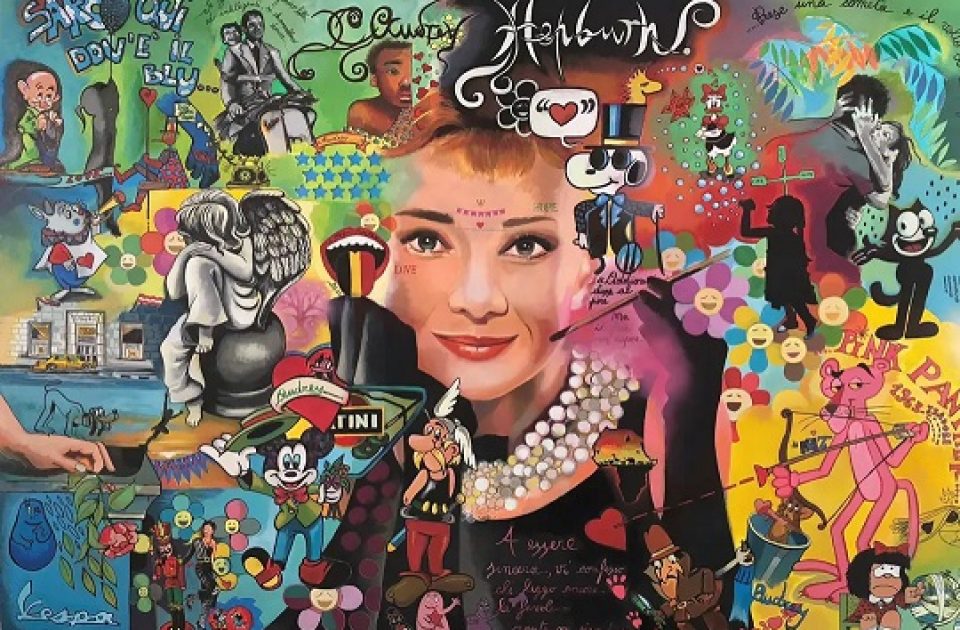 AUDREY IN THE STREET oil, spray, acrylic and marker pen on canvas123x181 cm 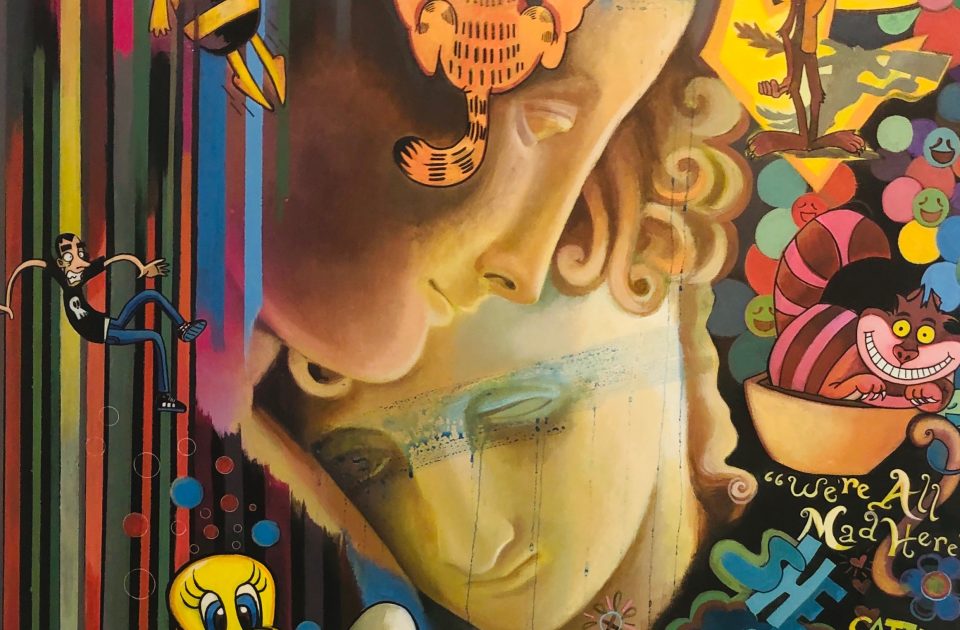 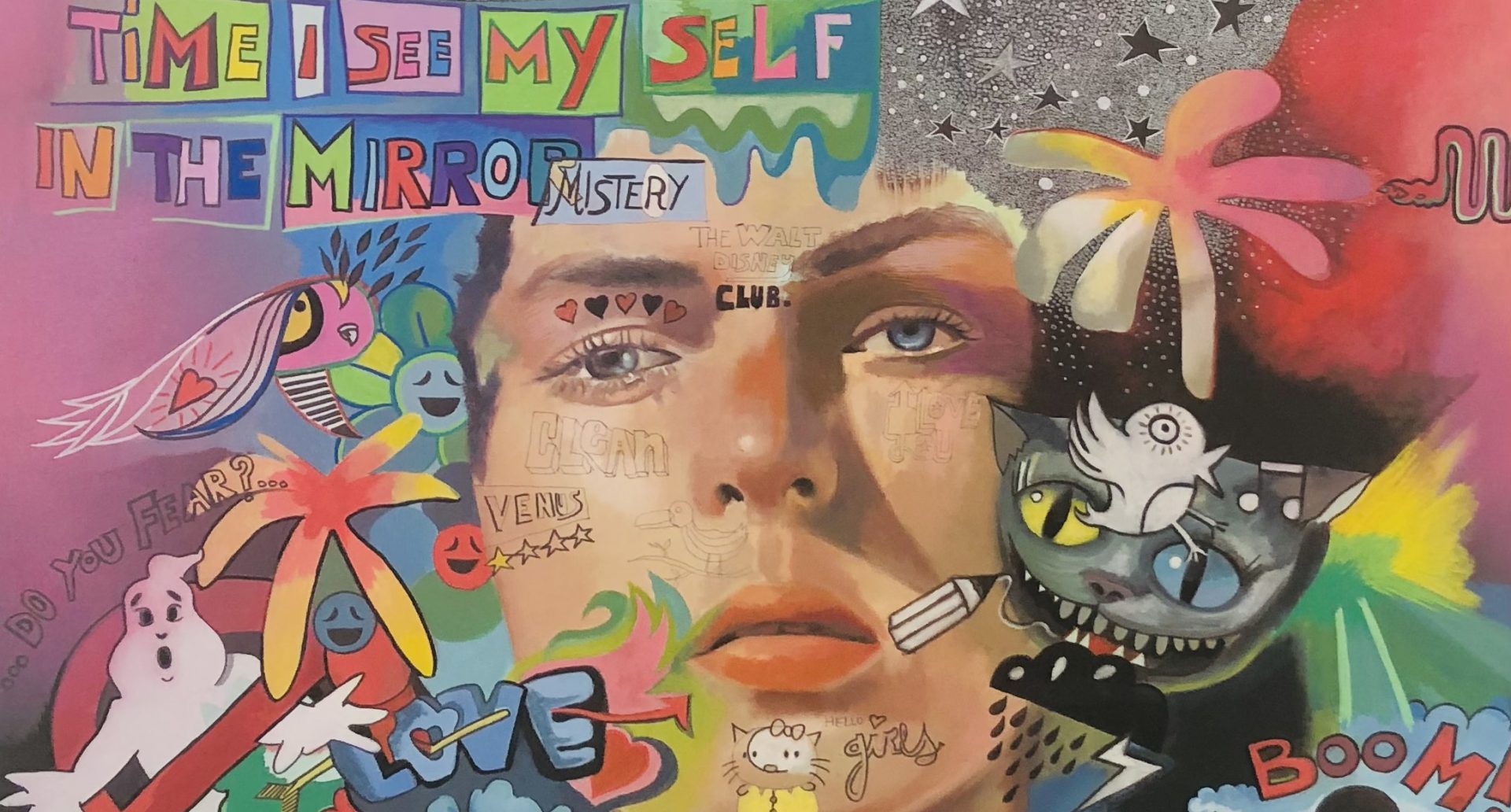 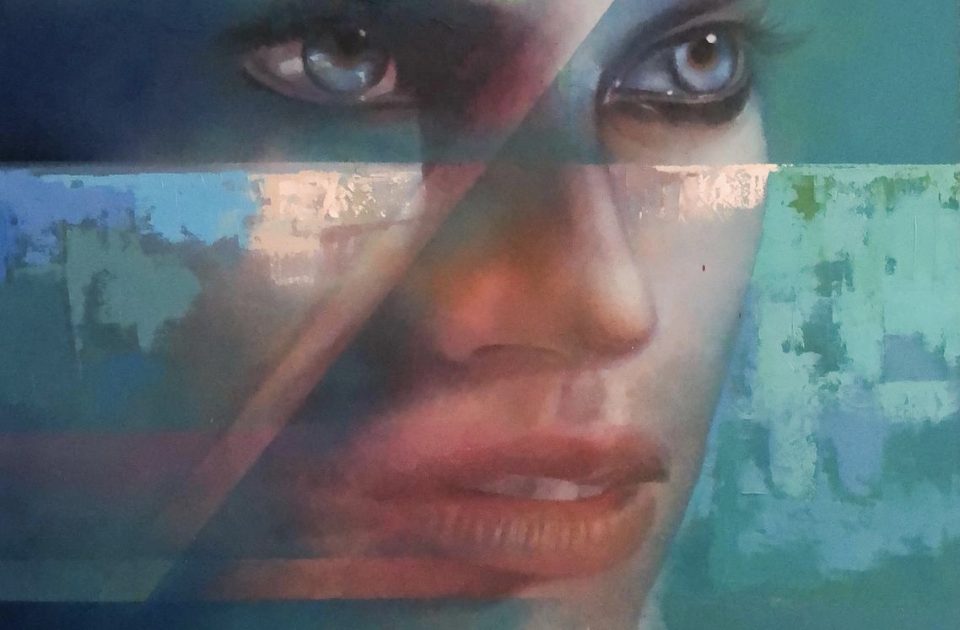 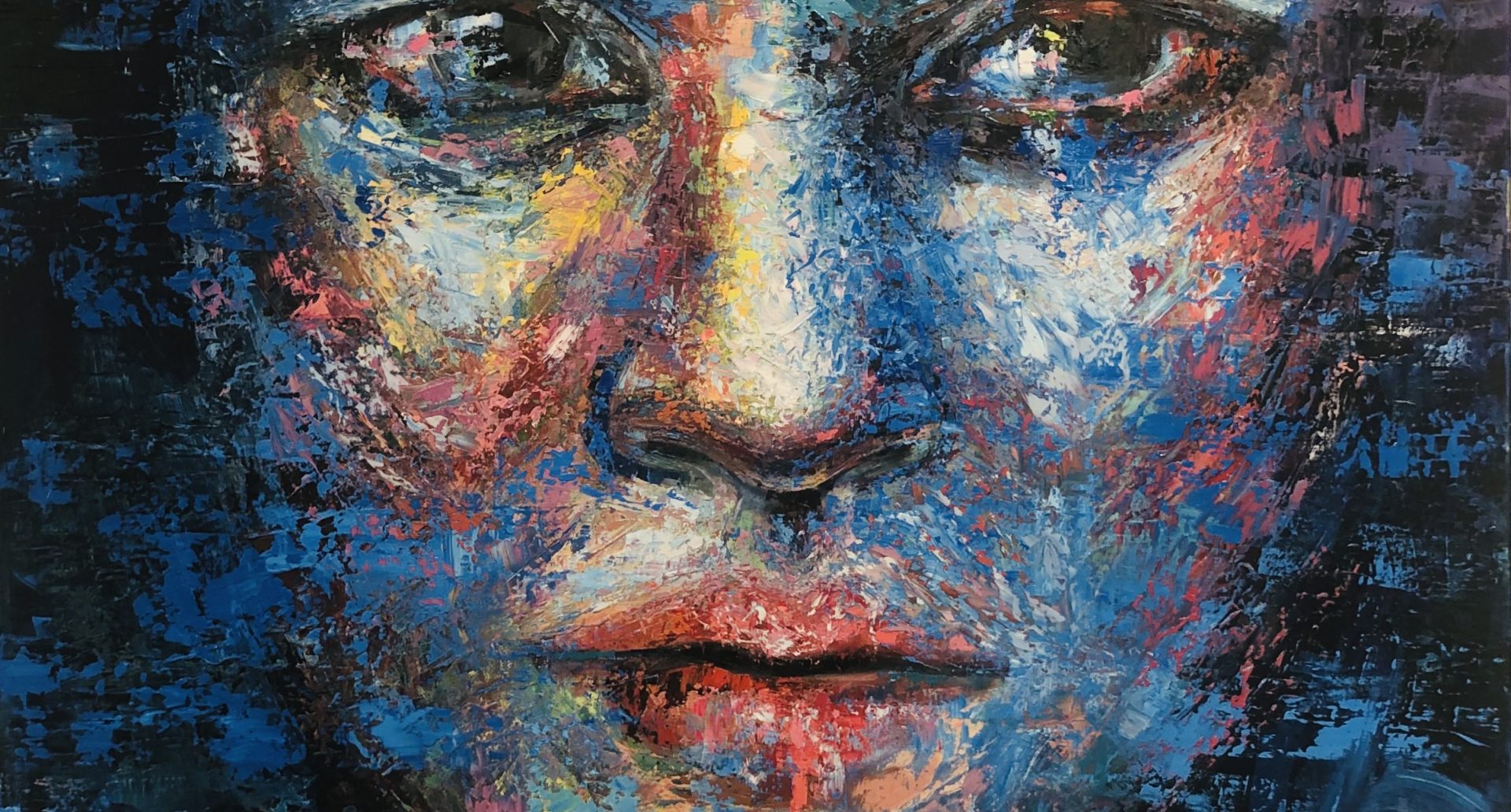 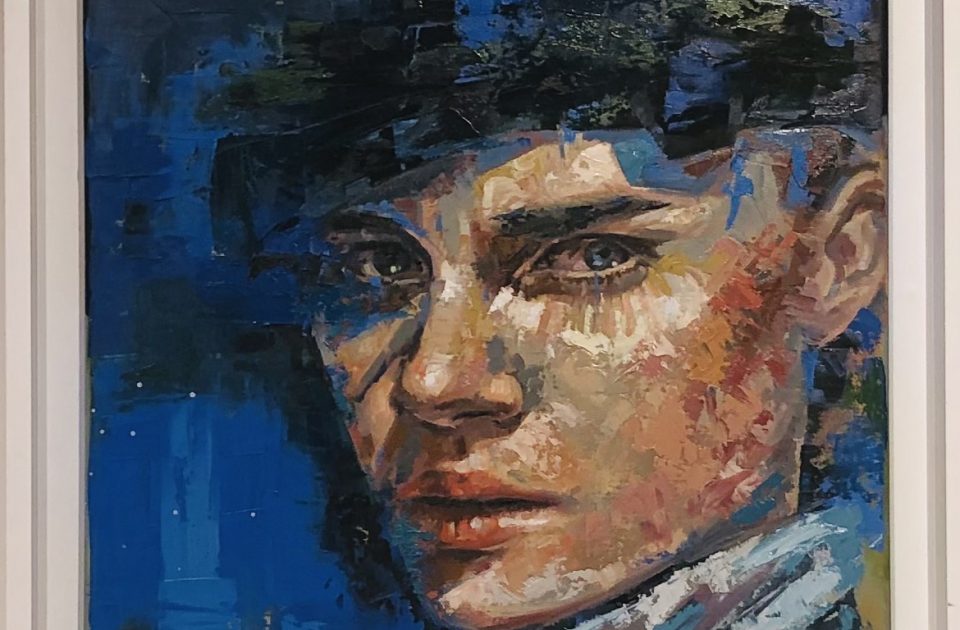 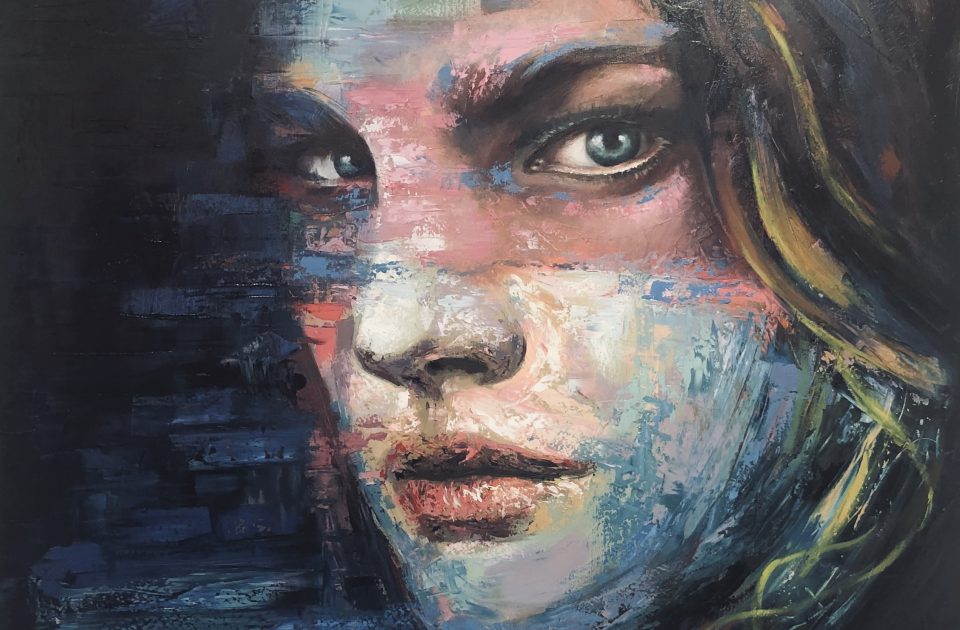 She was born in Lecce, the city of the Baroque, where she works and lives. Her passion for art began when she was a teenager; she portrayed friends and relatives. Marina started as a student at the Istituto Statale D’Arte G. Pellegrino in Lecce and then, transferred to L’Aquila, she graduated from the Academy of Fine Arts of L’Aquila. Marina had an important collaboration with the artist Fabio Mauri from 1990 to 1995 in the project IDEOLOGIA E NATURA as a performer in Rome, Milan, Florence, London, and Paris. In 1996 she opened a studio in L’Aquila and, after an excellent production of oil paintings, portraits, large murals, trompe l’oeil in interiors, she had his first personal exhibition in 2006 during the last Celestinian Forgiveness entitled “DONNA BETWEEN LAND AND SEA.” In 2008 she moved to Milan with collaborations with the Driade and Minotti brands. In spring 2009 he participated with a solo show in the Fuori Salone event “HEART ATTACK” during the Salone del Mobile with large format paintings. Marina returned to Lecce in 2012 where he continued his production and collaborated with VERNICE ARTE, an appreciated gallery in Bari. In 2014 she started a project of pop works with applications under the pseudonym MARINAIA, and after some personal and collective exhibitions she collaborated with the journalist and writer Silvia Mobili illustrating with 22 tables the last book “Le Fiabe Mobili.”  In 2014 – Personal Exhibition at Hula Hoop Gallery in Rome 2015 – Reggio Emilia Fair with Neoart Galley 2016 – Fiera di Forlì with Neoart Galley 2016 – Personal Exhibition at Maryarte Gallery – Bitonto. 2016 – Exhibition – Collection – Ancona 2017 – Foggia Fair with Ugallery 2017 – Collective exhibition – Alauda project – Adelfia – 2019 – Exhition SyArt Festival in Sorrento Foundation, Villa Fiorentino – 2019 SyArt Gallery Sorrento

Marina Mancuso that since adolescence discovers an impelling transport for art. After high school, she moved to L’Aquila, graduating from the Academy of Fine Arts, starting collaborations that saw her engaged in Rome, Milan, Florence, London and Paris. Returning to her beloved Puglia, she transformed her home into an artistic studio by collaborating with galleries dedicated to the contemporary. In her career she investigates multiple techniques going into a neo figuration. Marina Mancuso calls into question an artistic genre in particular: The portrait. For the purposes of the fact-finding survey on the work of the important artist, it is possible to recall the evolution of the genre itself and the significant changes that have occurred from the second half of the twentieth century to today. Illuminating the words of the Dutch artist Vincent Van Gogh in one of the letters addressed to his dear brother and supporter Theo:

[Arles, 11.8.1888] […] I find that what I learned in Paris goes away and I return to the ideas that had come to me in the countryside, before I met the Impressionists. […] Instead of trying to render exactly what I have before my eyes, I use color in a more arbitrary way to express myself with intensity. Anyway, let’s leave the theory alone, I want to give you an example of what I mean. I would like to paint a portrait of an artist friend […]. This man should be blond. And I would like to put in the picture the esteem and love I have for him. I would therefore portray it as it is, as faithfully as possible, to begin with. But the picture would not end like this. To finish it off I will be an arbitrary colorist. I will exaggerate the blond hair, coming to orange tones, chrome yellow, pale lemon. Behind the head, instead of painting the banal wall of the miserable apartment, I will paint the infinite, I will make a simple background of the richest, most intense blue that I will be able to obtain; from this simple combination, the blonde head, illuminated on this sumptuous blue background, makes a mysterious star-like effect in deep blue. […] Ah, dear brother … and good people will see in these exaggerations only caricature. […]

The subjects depicted by Van Gogh will be able to synthesize and translate into painting, through exasperated and deformed faces, a dramatic historical moment. The important revolution inaugurated in the expressionist period, the advent of the photographic technique and the further alterations with consequent disruption and total loss of figuration through the avant-gardes of the second half of the twentieth century, are the basis of the cognitive study of contemporary artists such as Marina Mancuso. Artists who despite strong prejudices towards portraiture and neo-figuration continue a dialogue in which the human figure is placed at the center. The represented subject was born from an introspective investigation of the artist who manages to move beyond the boundaries of the visible and translating into results with a strong figurative system to others where the pictorial material breaks down towards informal derivations.

The Opera selected and recent is entitled “Chandra”. The fixed and magnetic gaze of the female subject, interspersed with the application of color in the foreground, reaches the lightning user. The face retains its physicality and stability despite the dripping effect of the oil color and the rapid brush strokes of the base. Chandra with its confident and imperturbable expression emerges from the bold colors, going beyond the very limit of the support and marking its compositional structure.

Not infrequently the artist blends the color in the iris in a distinct way, accentuating transparencies and light effects in a single eye.

The technique: oil on canvas, size 120 x 100 cm, application of the color through the brush with final resumption, in some points, by spatula.